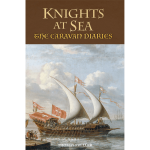 Knights at Sea: The Caravan...

On 6 February 1807 the Bavarian colonel and artillery expert Cajetan von Spreti was killed by a shrapnel in course of the siege of the Prussian fortress at Cosel. Only 38 years old, Spreti already had a chequered career behind him. The formative years of this career he had spent in Malta and in the navy of the Order of St John. About this time he composed a detailed diary and also wrote several letters to comrades in the Order and to members of his family shedding light on the situation of the Order’s navy, and on military, social, and cultural life in Malta at a time of the French Revolution of 1789. The other main character introduced in this book is Karl von Zinzendorf who undertook his caravans in Hospitaller Malta two decades before Spreti and examined Malta, the Order, and its navy in the mid-1760s from a different angle, that is from the point of view of an economist and an enlightenment profiled observer.